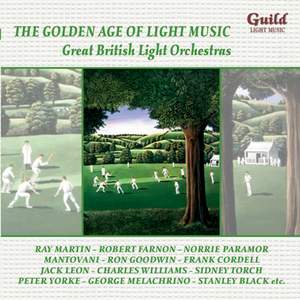 trad.: Oh Dear! What Can the Matter Be?

N / A: April in Portugal

Chacksfield: Prelude to a Memory

Schertzinger: Sand in my Shoes

N / A: From here to Eternity

Rose, D: Parade of the Clowns

This new Guild Light Music series has already focussed attention on the many fine recordings made during the 1940s and 1950s, and it is now appropriate to concentrate on the output from British studios. A combination of talented composers, plus highly professional musicians to perform the music, meant that the resulting high quality was recognised and appreciated throughout the world. Names such as Robert Farnon, George Melachrino, Mantovani, Stanley Black and Sidney Torch became familiar through their regular broadcasts and new releases, but they were not alone in ‘flying the flag’ for light music, as all the other writers, arrangers and conductors featured in this collection will readily prove. Some of the melodies will rekindle happy memories, but there are plenty of new treats to discover as well.