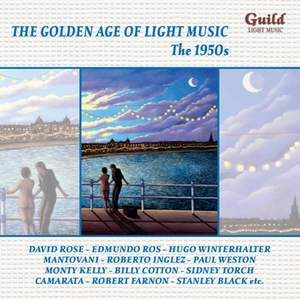 Rose, D: Waltz of the Bubbles

Trenet: At Last, At Last

Ahlert: The Moon Was Yellow

N / A: Parade of the Film Hits: Broadway Melody, Laura, Wedding of the Painted Doll, Please, Over the Rainbow, A fine Romance, Be My Love, La Ronde, the Trolley Song

With the new decade came a revolution in the way in which music would be heard in the home, thanks to the arrival of high fidelity sound and the long-playing record. Both were ideally suited to the requirements of light orchestras, and before long their albums were selling in millions. But for a while 78 and 45rpm singles still dominated the market, and Light Music featured regularly in the lists of latest releases from the record companies. New names such as Ray Martin and Ron Goodwin emerged to challenge the past masters, but there was plenty of room for everyone and the record-buying public were the main beneficiaries. This third CD in Guild's new Light Music series provides a ‘snapshot’ of a world that was determined to start enjoying itself once again, and the bright and breezy sounds produced by so many orchestras world-wide undoubtedly contributed towards those happy feelings.