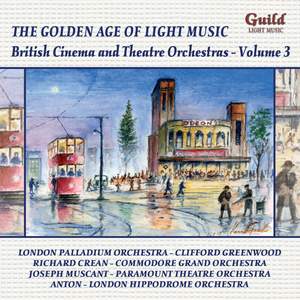 Jessel: Wedding of the rose

Künneke, Eduard: The Song of the Sea (Selection)

None: What the Forest Whispers: Waltz

Ancliffe: The Valley of the Poppies

The two previous collections focussing upon this area of the music scene have prompted a steady flow of requests asking for more. It seems that a considerable number of music lovers retain a special affection for music mainly from the inter-war years of the 20th century, and this was a time when theatres and cinemas employed many musicians in their ‘house’ orchestras. Many became known through their broadcasts and recordings, and these ensembles offered record buyers a wide choice of light music from leading composers in Europe and America, as well as nearer home. The arrival of talking pictures towards the end of the 1920s heralded the gradual demise of the orchestras, but the general public had become accustomed to an element of live musical entertainment on their frequent visits to the cinema. Partly as a cost-cutting exercise, most orchestras were replaced by theatre organs, but in some cases the change-over was gradual, and for a few years both organs and orchestras co-existed. Some of the tracks on this CD reflect this temporary transformation, which virtually came to an end with the outbreak of World War 2.