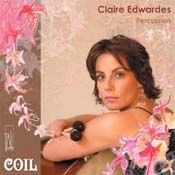 Percussion music has tended to represent the more innovative side of recent Australian music, due to its capacity to draw ideas from different cultures and to cross stylistic boundaries...With... — Sydney Morning Herald More…

Karski: Beginnings to no End

Ford, A: The Armed Man

Claire Edwardes has been making a mark on the Australian contemporary music landscape since winning the ABC’s Young Performer of the Year in 1999 and the prestigious Freedman Fellowship in 2005. She has returned from studies and performances in Europe and is now involved in several new music ensembles in Australia as well as establishing herself as a soloist.

This is her debut solo CD, and sparkles with the energy and vitality that characterise her live performances. The centrepiece of the repertoire Claire has chosen for this recording is Ross Edwards’ More Marimba Dances. His earlier Marimba Dances has become one of the world’s most-played and most-loved percussion works. This second work contains all the qualities that made the earlier piece such a favourite with both performers and audiences alike.

Middle-generation Australian composers are further represented here by substantial works from Gerard Brophy, Andrew Ford and Andrew Schultz. The individual compositional and rhythmic styles of these three composers is very evident when they write for solo percussion. Each has written a strong piece, with elements of both virtuosity and emotion.

Claire has also encouraged composers of her own age to write for her, and we see the results in the works by Damien Ricketson and Dominik Karski - not wildly outlandish works but pushing the conceptual and musical boundaries just far enough.

When all that is done we can relax with the gentle minimalism of Mark Pollard’s two short works - better than an aspirin!

This CD has been funded by the Music Fund of the Australia Council.

Percussion music has tended to represent the more innovative side of recent Australian music, due to its capacity to draw ideas from different cultures and to cross stylistic boundaries...With playing of well-coloured liveliness, Claire Edwardes captures a range of characteristic sounds