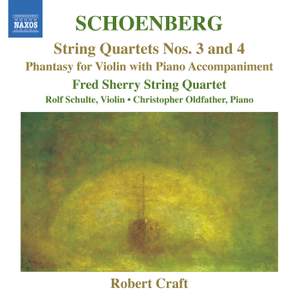 the energy and eloquence of Fred Sherry and his colleagues ensure that the effect is never merely strenuous, never turgid. Though often aggressive, the music dances and sings...Thorough but life-affirming,... — Gramophone Magazine, December 2010 More…

While Schoenberg’s final two string quartets inhabit atonal sound worlds, the Third draws on Classical forms such as theme-and-variations, minuet and sonata-rondo, its unsettling opening movement recalling a fairytale picture, ‘The Ghostship’, its Adagio a movement of spiritual depth and beauty.

Schoenberg was particularly pleased with his Fourth String Quartet, which follows a creative logic of continual development and variation derived from the music of Bach and Mozart, Beethoven, Brahms and Wagner.

The Phantasy is a virtuosic peroration for violin with commentary from the piano, a prime example of Schoenberg’s avowed aim to write ‘really new music which, as it rests on tradition, is destined to become a tradition’.

“Robert Craft was put on this earth to produce clear blueprints of Schoenberg and Stravinsky scores.” Gramophone

the energy and eloquence of Fred Sherry and his colleagues ensure that the effect is never merely strenuous, never turgid. Though often aggressive, the music dances and sings...Thorough but life-affirming, this performance sums up the spirit of the whole disc in admirably uncompromising fashion.

...the fusion of the familiar and the untrodden remains explosive and exhilarating, certainly as expounded by these players, who vary between the works. In common is the cellist Fred Sherry, veteran of the American modern music scene. The fourth quartet is led by the outstanding Leila Josefowicz.

...the two works sound fresh and vital, neither four-square in their phrasing nor rhythmically stolid. The Sherry Quartet presents both with total naturalness, giving the music all the space it needs to breathe and express itself.