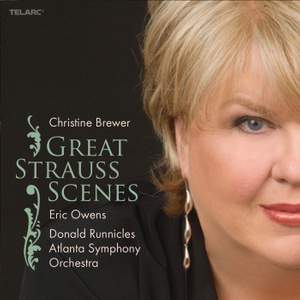 Brewer sails through the test. Her Elektra is a young woman shocked into life by the arrival of Orestes...her voice lightened to give her youth as she waits; and then comes a seemingly unstoppable... — BBC Music Magazine, October 2010, 4 out of 5 stars More…

This collection of music from the operas of Richard Strauss is performed by one of the leading singers of our time, the award-winning soprano Christine Brewer. The recording also features the Atlanta Symphony Orchestra under its highly regarded principal guest conductor Donald Runnicles, as well as the bass baritone Eric Owens, who joins her in the Recognition Scene from Elektra and the Imprisonment Scene from Die Frau ohne Schatten. Additionally the disc includes music from Capriccio and Salome.

Richard Strauss was one of the most successful opera composers of the 20th century. He is particularly well-known for writing strong roles for his heroines, not just the Marschallin in Der Rosenkavalier, but many more, from Salome and Elektra to the Countess in Capriccio.

Christine Brewer’s range, golden tone, and boundless power and control make her a favourite of the stage as well as a sought-after recording artist. Her other recordings on Telarc include Strauss’ Four Last Songs, also with Donald Runnicles and the Atlanta Symphony. In a glowing review of the disc, The Sunday Times said Christine Brewer “brings a soaring opulence to this music, the tone sumptuous and rounded, the top notes gleaming and full, unequalled by any other soprano in this music today.”

Brewer sails through the test. Her Elektra is a young woman shocked into life by the arrival of Orestes...her voice lightened to give her youth as she waits; and then comes a seemingly unstoppable stream of luscious exultant tone...there's an unbearable beauty about Brewer's singing when she kisses the mouth of the dead Jokanaan. Donald Runnicles is a noble partner throughout

Brewer's dramatic soprano voice, though large and opulent, never loses its warm, lyric core of purity. She soars effortlessly over the orchestra...[her] triumphant Salome is dangerous yet vulnerable - just as she should be.

Be warned - the dynamic range is huge. It would be a good idea to let the neighbours know what is coming...Brewer is fully involved and in splendid voice, letting herself go at the top with a freedom she does not always manage in the theatre...at the climaxes the orchestra does not half let rip.

Christine Brewer, a superlative Strauss singer, wields her sumptuous voice to impressive effect in the recognition scene from “Elektra,” the imprisonment scene from “Die Frau Ohne Schatten” and the final scene from “Salome.”