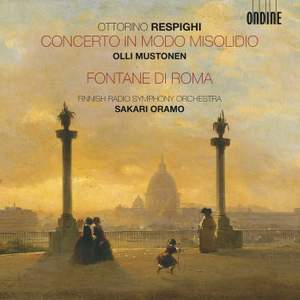 Fountains of Rome is wholly engrossing: this is a fine performance very well-captured. — Classic FM Magazine, January 2011, 3 out of 5 stars More…

The symphonic poem Fontane di Roma remains one of Respighi’s most popular works and forms part of his Roman Trilogy. Each movement depicts one of Rome’s fountains during different periods of the day and night, while the work as a whole showcases the centuries-old Italian marriage of culture, art, and worldly pleasure.

The discovery piece on this disc, the monumental Concerto ‘in the Mixolydian mode’, deserves more widespread introduction into the standard repertoire; its title refers to the work’s majestic main theme that is derived from medieval plainchant.

This work’s champion, star pianist Olli Mustonen, has been hailed by The Sunday Times as, “a living dream of pianism, having broken through an expressive barrier that other players do not know exists.”

Fountains of Rome is wholly engrossing: this is a fine performance very well-captured.

Oramo and his Finnish players to give us a highly atmospheric reading of exemplary clarity and, in the "Trevi", powerful dramatic effect.

Mustonen has a genuine feel for the [Concerto's] most poetic moments and the way they fit into the greater scheme of things...Sakari Oramo would seem to be in total agreement with him, leading the magnificent Finnish Radio SO in a truly outstanding performance

Respighi’s grandiloquent Concerto in the Mixolydian Mode of 1925 is a magnificent testament to piano opulence, fully expounded here by Olli Mustonen...Oramo and his Finnish forces provide the finesse and atmosphere