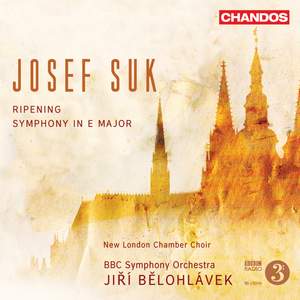 The symphony is attractively neat and satisfying, but Ripening is on a completely new emotional plane, with a Mahlerian juxtaposition of emotions, a scintillating emotional thrust and a virtuoso... — Classic FM Magazine, December 2010, 5 out of 5 stars More…

The Czech maestro Jiří Bělohlávek performs works by his countryman Josef Suk, conducting the BBC Symphony Orchestra, with whom he is their Chief Conductor.

As a composer, Josef Suk followed in the tradition of Smetana and Dvořák, the latter of whom was not only his professor at the Prague Conservatory, but also became his father-in-law – Suk married Dvořák’s oldest surviving daughter, Otilie, in 1898, and the death of Dvořák in 1904 and ‘Otilka’ a year later resulted in the composition of one of the composer’s most powerful and deeply felt works, the Asrael Symphony – also recorded by Bělohlávek (CHAN 9640).

Like Novák – another key Dvořák pupil – Suk fully embraced his national background, composing in a late romantic style imbued with his individual approach to impressionism and native folk culture.

Following the success of his Serenade in E flat, Suk wished to take up the challenge of writing a symphony, influenced as he was by the contributions to the genre of his own teacher, and of Brahms. Suk’s First Symphony was actually begun in London in 1897 and completed two years later. This new CD provides an excellent opportunity to hear the rarely recorded early work, with its fresh melodic appeal and inventive orchestration.

Ripening is one of the composer’s masterpieces, a highly colourful and superbly sustained symphonic poem, brilliantly orchestrated, with a chorus making its wordless contribution at the work’s late, emotional highpoint. Suk said of Ripening: ‘I worked on this composition for almost five years. In its very cohesive musical form you will find all degrees of human emotions. In this piece I immerse myself once more into the joys and tragic shadows of life but towards the end I emphasise, in the large fugue, that work is the liberator. After a large and passionate build-up of tension and excitement, towards the end a deep calm arrives in which, however, shimmers a hymn of affirmation and life.’

The symphony is attractively neat and satisfying, but Ripening is on a completely new emotional plane, with a Mahlerian juxtaposition of emotions, a scintillating emotional thrust and a virtuoso handling of the orchestra...What you hear on the CD is as much an astonishing testament to the abilities of modern day sound engineers as it is a fine performance.

Jiri Belohlávek's tender reading of this 1917 symphonic poem is flooded with dewy woodwind and glowing strings.

Ripening, a symphonic poem, is a highly charged piece, full of poignant emotion and anguished outbursts. Its power is echoed by the First Symphony...in which Belohlávek inspires the BBCSO to a blazing performance.