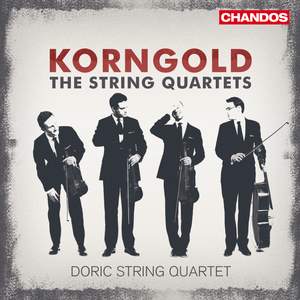 The Doric String Quartet is now firmly established as one of the outstanding quartets of its generation. Now in its eleventh season, it regularly performs at major festivals and venues throughout the UK as well as abroad in continental Europe and Asia. This is the Quartet’s debut CD on Chandos as exclusive artists.

Most famous for his lushly romantic film scores, Erich Wolfgang Korngold wrote a quantity of music for the concert hall, the stage, as well as three highly individual string quartets between the years 1920 and 1945. Korngold was one of the great prodigies in the history of classical music, and by the time he started work on his First String Quartet (completed 1923), he had already written what many consider to be his magnum opus, the opera Die tote Stadt.

The three quartets range widely in style and are all very appealing. The First is notable for its strikingly adventurous harmony, the Second (1933) for its sheer wealth of melodic appeal, whilst the Third (1945) uses material from his film scores, and is as varied and dramatic as many of the films which he scored.

‘This is an ensemble, young but mature of insight, that plays Haydn’s music with spirit, illuminating its blend of wit and sophistication, grace and vivacity, cunning and seemingly effortless spontaneity… The Doric’s performances, without exaggeration but with just the right degree of elucidation, revealed the music’s extraordinary originality and the way that Haydn can explore the potential of his thematic material so thoroughly yet so artlessly… Unequivocally, these were performances of terrific panache and perception, seeming to get right under the skin of Haydn’s creative genius.’ The Sunday Telegraph, 18 January 2009

‘Great wisdom and no self-indulgence’ The Strad, 2008

the Doric Quartet approaches the music with tremendous commitment and excellent ensemble...there's some beautiful portamento, especially from leader Alex Redington

From the off, the Dorics stamp their own emphatic claim to ownership with a bold incisive feel for the swirling stylistic and emotional undercurrents in Korngold’s characteristically rhythmically alert, sumptuously lyrical and exquisitely crafted music.

The Doric Quartet manages to combine the necessary linear and rhythmic precision needed to do full justice to Korngold's sophisticated scoring with a warmth of tone and intensity of expression that makes the players highly persuasive advocates.

Their playing is alive to every nuance and turn of phrase in these absorbing and endearing valentines to the city of the composer's birth...This is a most desirable issue of music with which the Doric foursome are totally at ease.

These quartets, spontaneously structured, show Korngold at his most melodically memorable and rewarding. They are played most sympathetically here, and are given top-quality Chandos recording.

The Doric Quartet, in these superb performances (enhanced by the rich, crystal-clear recording), play them as if they were established repertoire works, which they deserve to be.

All three [quartets] enshrine sinewy ideas and piquant harmony combined at times with a Viennese seductiveness, and the Third by no means sells out to easy tune-smithing.

Each quartet, from different decades, twists the kaleidoscope a different way. No 1 is knottily chromatic; the second salutes old Vienna; while the third and best looks back on life with melancholy, regret and laughter.