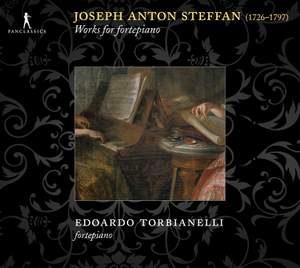 Stepan: Keyboard Sonata in A major

The piano style of Joseph Anton Steffan, whose compositions reflect wide formal and aesthetic developments, is distinguished by an idiosyncratic playing method combining stylistic elements of various origins and character in organic and original ways. He also demonstrates a penchant for full chords and energetic touch, often with bold, almost improvisatory bravura. Although the printed piano music is explicitly designated for 'Clavicembalo', dynamic indications are already apparent in several places in his early works, which thus require the use of an instrument with various sound colour possibilities. In several manuscripts of presumably later works, the designation for the 'Forte e Piano' is clear and furthermore, they contain more dynamic and expression marks.

Edoardo Torbianelli has made recordings for various radio and television stations, as well as recordings with Pierre-André Taillard and Thomas Müller for hm France. He has recorded the piano works of Clementi and Gade, as well as a recording with Sergio Azzolini on historical bassoon for Pan classics. His work has been enthusiastically received by international critics (Disque du mois and Recommandation of Répertoire, 5 Diapason and two Diapason d’or). Since 1998 he has taught at the Scola Cantorum Basiliensis.