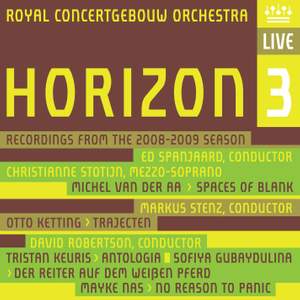 Mayke Nas: No reason to panic

With this third release in the Horizon series, the Royal Concertgebouw Orchestra once again underlines the importance it attaches in its concert programming to performances of contemporary music. The compositions featured on this CD represent a selection of recordings of contemporary works which the orchestra premiered in its 2008–9 season (some of which were commissioned by the orchestra) or of which few or no quality recordings are available. Two Dutch composers of the latest generation (Nas and van der Aa) are brought together here with two members of the older guard (Ketting and Keuris). Sofia Gubaidulina, for her part, represents the international contingent on this CD. In its performance of these works, the orchestra was led by conductors Ed Spanjaard, Markus Stenz and David Robertson. The CD also features soloist mezzo-soprano Christianne Stotijn, to whom van der Aa dedicated his song cycle.