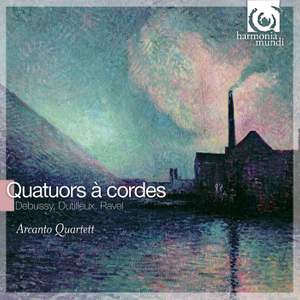 The interpretation of the Debussy Quartet has sinew and propulsion, with that apt shading of dynamics and subtlety of nuance that have become hallmarks of the Arcanto's distinctive and distinguished... — Gramophone Magazine, November 2010 More…

Antje Weithaas, Daniel Sepec, Tabea Zimmermann and Jean-Guihen Queyras founded the Arcanto Quartet in 2002. The four musicians, who in addition to their musical affinities share a close personal friendship, quickly conquered the world of chamber music and have played all the major European venues. The 2009/10 season started with a tour of Japan in September, followed by a residency at the Wigmore Hall, where the quartet invited Jörg Widmann, Silke Avenhaus and Olivier Marron for several concerts. This autumn, the Arcantos will visit North America. For their third CD for harmonia mundi they perform three French String Quartets, all by composers who wrote little chamber music. Debussy and Ravel composed their only string quartet at the start of their careers, whereas Dutilleux wrote Ainsi la nuit shortly before his 60th birthday. Debussy’s quartet, dedicated to the Ysaÿe Quartet, is his only work to possess an opus number. Written in 1892-3, it comprises the standard four movements and adopts sonata form in the two outer movements. The String Quartet of Ravel was composed in 1902-03 and premiered by the Heyman Quartet on 5 March 1904. It possesses undeniable signs of kinship with the Debussy work: it conforms to the cyclic principle, and begins and ends with a sonata form movement; its scherzo is similarly characterised by crackling pizzicatos which stylise the sound of the guitar and give the movement a Spanish colour; as with Debussy, the strings play with mutes in the first and last sections of the slow movement. The works of Dutilleux are rare and matured at length. Commissioned by the Serge Koussevitzky Foundation, Ainsi la nuit occupied the composer from 1971 to 1976. Dedicated ‘to the memory of Ernest Sussman [an American art-lover and friend of the composer] and in homage to Olga Koussevitzky’, it was premièred by the Parrenin Quartet at the Théâtre de l’Est Parisien on 6 January 1977.

The interpretation of the Debussy Quartet has sinew and propulsion, with that apt shading of dynamics and subtlety of nuance that have become hallmarks of the Arcanto's distinctive and distinguished style. Delicacy and fluency are equally embraced in this commanding performance, as they are in the Ravel

Right at the start, the performance of the Debussy quartet is a striking example of the Arcanto’s skill and stylistic perception. The playing has muscle, incisiveness and drive, tempered by delicacy of nuance...It is a riveting disc – a further manifestation of the Arcanto’s blend of finesse, flair and probing intelligence.

With their velvet tone the starry Arcanto Quartet prove ideal performers. Often the heartbeat is in the cello (Jean-Guihen Queyras, exceptionally eloquent); but whoever throbs, the music soars...A lovely disc.

The Independent on Sunday 5th September 2010

A "super-group" among quartets, with each player an established soloist, the Arcanto Quartet's intonation is faultless, its blend fresh and exciting.