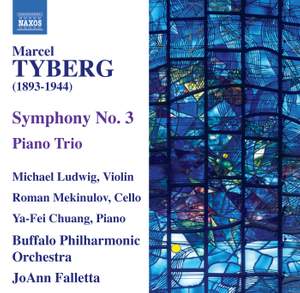 Rescued from oblivion before his tragic death in Auschwitz in 1944, Marcel Tyberg’s Symphony No. 3 sets out on a poetic journey with shades of Schumann and Brahms, Bruckner and Mahler, playful instrumental filigrees, colourful counterpoint and captivating harmonies.

This sweeping work for large orchestra received its première performances by the Buffalo Philharmonic Orchestra conducted by JoAnn Falletta, finally giving voice to a composer who never heard his masterpiece performed.

Tyberg’s chamber music also demonstrates his deep respect for 19th-century musical modes and manners; imbued with the spirit of Beethoven and Mendelssohn, his Piano Trio brims with a richly Romantic esprit.

JoAnn Falletta, who has established a reputation for conducting artistically important, but seldom-heard works, is embarking on a multi-year recording project of the lost works of the brilliant Austrian composer and Holocaust victim Marcel Tyberg.

“...one of the finest conductors of her generation” The New York Times on Falletta