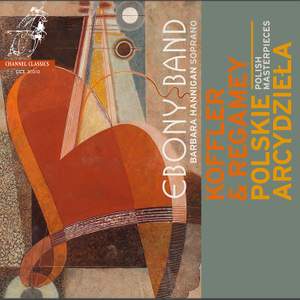 It is fascinating to see how composer like Regamey and Koffler negotiated their way through the technical and stylistic labyrinths of the time while simultaneously coping with extreme difficulties... — Gramophone Magazine, December 2010 More…

My quest of many years for unknown but worthwhile repertoire has seldom yielded such outstanding works as the Polish masterpieces on this recording. Koffler and Regamey are such unknown names that one would be inclined to conclude that they must be typical 'musiciancomposers', but even that is not the case. Among musicians too, their names do not usually ring a bell. But never before have I seen my musicians react so enthusiastically and emotionally to music I had placed before them. The Quintet by Konstanty Regamey, to which Katarzyna Naliwajek-Mazurek drew my attention during a visit to the library of Warsaw University, is a fascinating journey through a most varied and colourful landscape; one forgets the 12-note technique completely when faced with so much imagination and creativity. Józef Koffler's music, in particular the cantata Die Liebe, is of the greatest conceivable purity: one cannot sing of love, as expressed in this biblical hymn, in a purer and more intimate manner.

Why are these pieces hardly ever heard in our concert halls? Does Regamey make too heavy technical demands on the performers? Is Koffler's music too subtle for our time?

Werner Herbers, artistic leader & former principal oboist of the Royal Concertgebouw Orchestra The Ebony Band was founded in 1990 by Werner Herbers. Its core is made up of musicians from the Royal Concertgebouw Orchestra. The ensemble specializes in modern, adventurous music primarily from the first half of the 20th century. Special attention is focused on the (frequently unjustly) forgotten music of lesser known composers, deemed to be worthy of revival. The goal of the group now is the registration of detailed information about the music of the interbellum on record and the internet.

It is fascinating to see how composer like Regamey and Koffler negotiated their way through the technical and stylistic labyrinths of the time while simultaneously coping with extreme difficulties in social and civic life. For this reason alone, this disc is an elucidation.