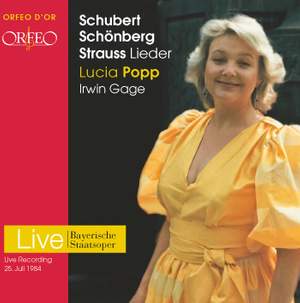 The music of Richard Strauss suited Popp as if she were wearing a tailor-made gown. In that composer's three songs of Ophelia, the soprano places that hapless heroine vividly before us. Gage's... — International Record Review, September 2010 More…

Lucia Popp was an absolute audience favourite for several decades. Besides her great operatic roles – first as a coloratura soprano, then in the lyric fach – she always maintained a large concert and lieder repertoire that demonstrated in equal degree her great musicality and charm.

At the Munich Opera Festival in 1984, Lucia Popp presented a combination of lesser-known songs of well-known composers in a programme that formed a musically colourful and harmonious whole. This live recording, made in the intimate rococo hall of the Cuvilliés Theatre, allows us to experience that concert once again.

Lucia Popp was partnered there by Irwin Gage, whose musical qualities matched her own, yet who refrained from placing himself in the foreground. With their opening selection of Schubert they were able to transfix the audience in such a manner that the ensuing group of Schoenberg’s early songs Op. 2 seemed to follow on quite naturally. In Strauss’s Ophelia Songs, Popp displayed her extraordinary ability to portray a stage character swiftly, yet in a manner wellrounded and accurate, by purely vocal means.

The last quarter of this song recital, also devoted to Strauss, was the most popular and was received with frenetic applause. These songs reached a magnificent climax in the encore 'Allerseelen'. This was followed by a return to Schubert with 'An Silvia'. It rounded off a dramatically conceived evening of German Romanticism, a superb example of how Popp could present her admirers with a performance deeply felt in its artistry, but never calculating or sentimental. It makes one regret all the more her all-too-early death.

Recorded at the Cuvilliés Theatre on 25th July, 1984

The music of Richard Strauss suited Popp as if she were wearing a tailor-made gown. In that composer's three songs of Ophelia, the soprano places that hapless heroine vividly before us. Gage's accompaniment deftly complements his partner's giddiness...Here, then, is a memorable reminder that we'll never stop missing Lucia Popp.