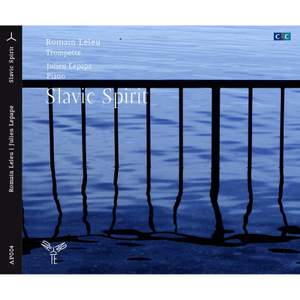 "The Slavonic works presented here include original works for trumpet, written by composers who are not well known to the general public, and also arrangements of popular works, ones that everyone must have heard at some time or another. The latter include Vocalise by Rachmaninov, Valse Sentimentale and the last movement, Mélodie, from Souvenir d’un lieu cher by Tchaikovsky, and the famous Flight of the Bumblebee, an orchestral interlude written by Nikolay Rimsky- Korsakov for his opera The Tale of Tsar Saltan. This recording represents an important new step for me; I hope it will give the listener as much pleasure as it gave me. “ Romain Leleu