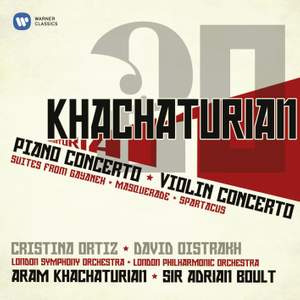 Oistrakh and the composer sound fresh as ever — BBC Music Magazine, November 2010, 3 out of 5 stars

The Entrance of Harmodius - Adagio of Aegina and Harmodius

Dance of the Gaditanae - The Rebels' Approach

Khachaturian: A Glimpse of the Ballet (Invention) - Adagio from the ballet 'Gayaneh'

The Sabre Dance and the Adagio of Spartacus and Phrygia may be Khachaturian’s most familiar works, but his colourful style and orchestral flair comes out in all his music, from the virtuoso concertos with their rhapsodic oriental-flavoured slow movements, to the satirical glitter of the Masquerade Suite.

Aram Khachaturian was born in 1903 into a poor Armenian family in Tbilisi, the capital of Georgia, which was then part of Imperial Russia and later the USSR. After moving to Moscow he took up studies with Myaskovsky at the Conservatoire, eventually becoming a professor there. In spite of having been an enthusiastic communist he was, in 1948, severely denounced by the Soviet authorities (along with Prokofiev and Shostakovich) for writing what they termed 'formalist' music: music that did not appeal to the masses. Khachaturian's works include some of the best-known music in the 20th-Century repertoire, most notably the ballets Gayaneh (from which comes the ever-popular Sabre Dance) and Spartacus, the Adagio from which was used in Stanley Kubrick's film 2001: A Space Odyssey. Suites from both of these works are contained in this set, along with a fine recording of the Piano Concerto that is making it's first appearance on CD, and David Oistrakh's incomparable recording of the Violin Concerto conducted by the composer.

Oistrakh and the composer sound fresh as ever