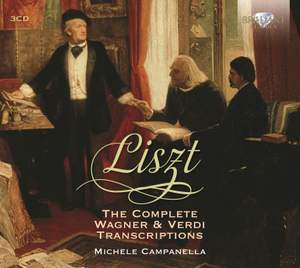 In a time when there was no recorded sound it was customary to promote the works of a composer by playing transcriptions for solo piano of well known works or excerpts. Super virtuoso Franz Liszt was a champion in this genre, his transcriptions are an art form in themselves, his complex and highly virtuosic piano writing enhanced rather than diminished the impact of the original work.

These recordings offer the complete transcriptions of two of Liszt’s heroes: Verdi and Wagner, featuring the famous Rigoletto paraphrase, the Duetto from Aida, the Spinnnerlied from Der Fliegende Holländer, the notorious Tannhäuser Overture (one of the most difficult pieces ever written) and the moving Isoldes Liebestod.

Played with authority and conviction by Michele Campanella, one of Italy’s foremost Liszt specialists, on a 1892 Steinway piano, lending a sense of authenticity to the performance.