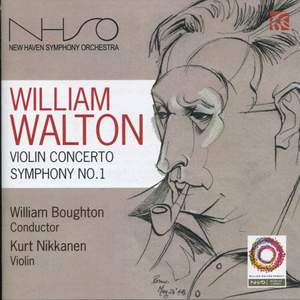 These are splendidly idiomatic performances, displaying a natural understanding of the flexibility needed in interpreting Walton's jazzy syncopated writing...it adds to the attractions of the... — Gramophone Magazine, October 2010 More…

Kurt Nikkanen has appeared internationally on the concert stage for more than two decades. Born in Hartford, Connecticut, he began his violin studies at the age of three and at twelve he made his Carnegie Hall debut, performing Saint-Saëns’s Introduction and Rondo capriccioso with the New York Symphony. An enthusiastic advocate of contemporary music, he has performed the John Adams Violin Concerto (under the composer’s direction), Aaron Jay Kernis’s Concerto for Violin and Guitar, and H.K. Gruber’s violin concerto Nebelsteinmusik, also under the composer’s direction.

He gave the world premiere of John Zorn’s Contes des Fées for violin and chamber orchestra and has recorded Steven R. Gerber’s Violin Concerto, written especially for him.

The New Haven Symphony Orchestra first rehearsed in 1894 and gave its inaugural concert in January 1895 under the direction of Horatio Parker at Yale University. It is the fourth-oldest symphony orchestra to have performed continuously in America, after the New York Philharmonic (1842), the Boston Symphony (1881), and the Chicago Symphony (1891).

These are splendidly idiomatic performances, displaying a natural understanding of the flexibility needed in interpreting Walton's jazzy syncopated writing...it adds to the attractions of the disc that this ideal coupling of two pre-war masterpieces is a rare, if not unique pairing.

...this is a performance that - especially in the slow movement - gets to the heart of the music...Boughton is excellent at revealing the solidity and underlying power of the work without at any time causing the music to overheat or run away with itself.