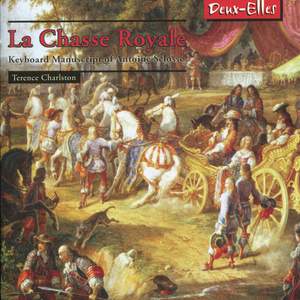 I. Courante and Variation

I. Allemande in C Minor

A newly discovered manuscript revealed to be the music of Antoine Selosse is given its premiere recording on disc by keyboard virtuoso, Terence Charlston.

Although it seems possible that Antoine Selosse (the Jesuit musician Antonio Mason alias Selosse, 1621-87, who was active at the English Jesuit College of Saint Omer in the 1680s) is the ‘Selos’ to whom the contents of the manuscript were attributed in the first flyleaf inscription, various factors mitigate against his authorship of the whole collection. The repertoire chosen for inclusion in Selosse’s remarkable book covers a broad spectrum of the genres popular in seventeenth century Europe and reveals a wide range of national influences and styles. It consists of mainly dance pieces (often with variations of their own) and these are grouped by key. Few pieces have a specific title and no composers are named but the authorship of only one piece can be stated with confidence: Bull’s popular The King’s Hunt 3 and the suites in G major (13-14) and D major (16-19) are strikingly similar, on stylistic grounds, to works by John Roberts.