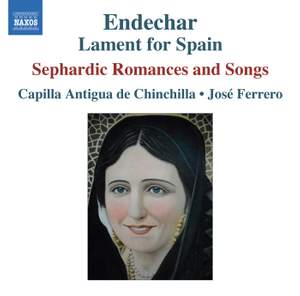 Sephardic music, from the ancient domain of al-Andalus (Andalusia), lies at the heart of this selection of songs in remembrance of a lost homeland.

The word endechar comes from a time before the expulsion of the Jews and their culture from Spain in 1492; within the Jewish community it meant ‘to sing funeral dirges’ or ‘to lament’.

After leaving Spain, the Sephardim kept alive the tradition of singing endechas (laments), romances (narrative ballads), and other songs in their traditional language, ladino, or Judaeo-Spanish, which was based on ancient Castilian.

This was enriched by the addition of words from Hebrew and then from the languages, music and instruments of the places to which they travelled, such as Greece, the Balkans, Turkey and Morocco.