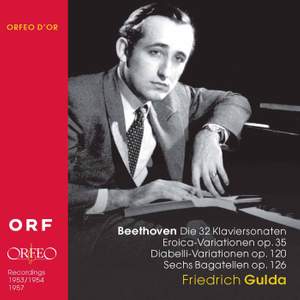 The appearance of a new, complete recording by Friedrich Gulda of the Beethoven sonatas, made before his two previously known cycles, can be regarded as a sensation. If a pianist makes three recordings within 20 years of the most important cycle for his instrument then it would be regarded, even by today’s standards, as extraordinary. But to have done it in the 1950s and ’60s was a unique achievement - the business of capturing it as a sound recording in the early 1950s was still something brave and new in every way. Schnabel’s recording from the 1930s had the ill luck of being made at the ‘wrong’ time, when the world was busy with greater problems; the same was more or less true of the first recording that Wilhelm Kempff began, but did not complete, during the War. To be sure, the history of sound recording has meant that constant technical advancements (LP, stereo and digital techniques) have been the prime reason for artists to make lavish, new complete recordings of the same works. All the same, Gulda’s second complete recording, for Decca in London, hitherto believed to be his first, still counts among the most audacious early recording projects of the sonatas in the post-war years. The recording that preceded it, which Orfeo have been authorised to publish here, was made for Austrian Radio. Gulda went to the Viennese studios to make it at the turn of 1953/4, at a time when the city was still under the control of the Russian occupying power. This young pianist, born in Vienna on 16 May 1930, had begun his international career in spectacular fashion by winning the Geneva Competition in 1946. He performed Beethoven’s sonatas in the autumn of 1953 in several Austrian cities. He was so ‘played in’ that it seems to have been a mere matter of routine for him to record up to six big sonatas in the space of just two days in the studio. This was an incredible achievement that is in no way diminished by the minimal glitches to be found here. If anything, these inaccuracies enhance the spontaneity and vibrancy of Gulda’s performance, which even at this early stage of his career was distinguished by a headstrong personality and exceptional abilities. His choice of tempi is fearless and stringent, while his high degree of precision is fostered by an economical use of the pedal and a rejection of any arbitrary accelerandi or ritardandi (as for example in the Hammerklavier Sonata). It is such aspects of his playing in particular that reveal a de-Romanticisation of Beethoven. This was a process to which Gulda’s interpretations contributed, yet which detracted not a whit from the master’s greatness. On the contrary: it is precisely the simplicity and the clarity of Gulda’s Beethoven interpretations – despite their occasional stylised moments – that make evident the humility and modesty of the pianist in the face of the supreme genius of the composer. The Sonatas are here complemented by the Six Bagatelles Op. 126, the Diabelli Variations Op. 120 and the Eroica Variations Op. 35.