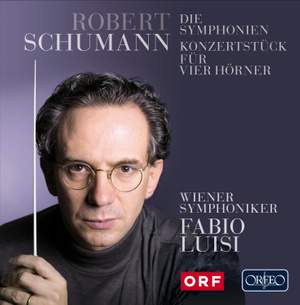 Most successful is the Rhenish Symphony No. 3, with a surging account of the opening Allegro, and an appropriately sombre view of the famous 'Cologne Cathedral' penultimate movement. — BBC Music Magazine, December 2010, 4 out of 5 stars More…

Robert Schumann the symphonist still stands in the shadow of Schumann the composer for piano and voice (the fate of Schumann the opera composer is no different). The idea that an orchestra with a great tradition of performing the Romantic repertoire should have good reason to play Schumann’s orchestral works gladly and regularly – even offering cycles of them – is something that the Vienna Symphony Orchestra and its chief conductor Fabio Luisi have put into practice, to their credit. The conductor and his orchestra meet all the orchestral challenges that Schumann places before them. They play with the greatest of technical subtlety and beauty of tone, from the spirited First, the 'Spring' Symphony, via the muted atmosphere of the Second, then the Third, 'Rhenish', with its rich palette of moods and impressions, to the fantasy of the Fourth Schumann’s art of climax and the conclusive manner of his repetitions are here heard just as clearly as are his deft combinations of Romantic colours and shadings. Thus the fourth movement of the Rhenish is accorded the sacred tone that is appropriate to it, just as the 'Romanze' in the Fourth Symphony is played as if it were a lover’s serenade. Fabio Luisi furthermore masters the tempo shifts and capricious quirks in Schumann’s fast movements. Here, the Vienna Symphonic plays with dizzying brilliance – and all is achieved 'live', without the safety net of the studio.

To complement the symphonies, the present recording also includes the Konzertstück for 4 Horns Op. 86, a powerful, vital work that stands in close proximity to the 'Rhenish', and which was composed during one of Schumann’s most productive periods. Schumann utilises the form of the Konzertstück to explore those spaces between the 'competitive' aspect inherent in a concertante work and the ensemble aspect of soloists and orchestra playing together as a symphonic ensemble. At the same time, the composer explores the possibilities of the modern valve instruments that themselves present further technical subtleties (and hurdles too). This work was long regarded as near-unplayable, but it is a matter of course that the horn players of the Vienna Symphony here play it with complete, sovereign command.

Most successful is the Rhenish Symphony No. 3, with a surging account of the opening Allegro, and an appropriately sombre view of the famous 'Cologne Cathedral' penultimate movement.

Luisi and the Vienna Symphony Orchestra, covering all four symphonies plus the stirring Konzertstück, follow the modern fashion for bracing speeds, period-style articulation and pronounced accents.

...manifest affection...glows from every bar of his performances (the Vienna Symphony seems willing to take on board his love for the music)

Luisi's approach to the Schumann symphonies is perfectly conventional, but bears his familiar hallmarks of sensitivity and stylishness...The result is one of the best of recent traditional cycles of these works, lacking the bracing rawness of some period-instrument accounts maybe, but thoroughly satisfying in its own right.

The tempi are sometimes daring – a langourous Larghetto in the Frühlingssymphonie, a slightly frantic Lebhaft in the Rheinische – but convincingly argued. Though Vienna's fruity clarinets dominate the sound, the articulation is excellent.