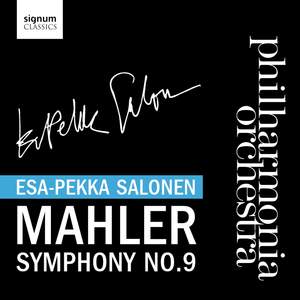 Salonen surely does nearly everything that most of us require from a cutting-edge interpreter with plenty to say. His Boulezian ear for balance keeps all the textures phantasmagorically clear...[His]... — BBC Music Magazine, August 2010, 4 out of 5 stars More…

Signum’s third disc with the Philharmonia Orchestra and their Principal Conductor Esa-Pekka Salonen is drawn again from their celebrated Vienna: City of Dreams series of 2008-9. The Ninth symphony is often interpreted as a farewell to the world, in part because Mahler never had the chance to hear it performed. As one critic wrote, “If you want to learn to weep, you should listen to the first movement of the Ninth, the great, magnificent song of ultimate farewell”. Other releases this year with the Philharmonia orchestra will include Mahler’s Sixth Symphony with Esa-Pekka Salonen, and Mahler’s Fourth Symphony with Sir Charles Mackerras.

Esa-Pekka Salonen on the disc:

“Our new recording of the piece is a live recording, of a performance we gave after we had played the piece on tour in places such as the Concertgebouw and Cologne. I very much like the idea of recording this piece live. In fact, the idea of recording that finale in a studio doesn’t feel right. So many of the most celebrated recordings of the piece – Bernstein, Karajan, Bruno Walter in 1938 – have been concert recordings. It’s no accident. This is about death and there must be a sense of no return. It’s your only shot. You just do it and live with the results. This is real life and death, not a video game.”

Salonen surely does nearly everything that most of us require from a cutting-edge interpreter with plenty to say. His Boulezian ear for balance keeps all the textures phantasmagorically clear...[His] alertness to the right sonority gives us some moments of supernatural beauty

No painstaking, hyper-emotional lingering for Esa-Pekka Salonen: he propels this symphony with a single-minded, urgent zest for life...Salonen delivers a compelling performance...a persuasive traversal full of temperament, acuity and apposite contrasts of mood.

Salonen emphasises the prophetic rather than the nostalgic. He is electrifying in the grotesque rondo-burlesque scherzo...In the two massive slow outer movements...[he] empathises with the love of life and the beauties of nature that paradoxically emerge from Mahler’s premonition of death.