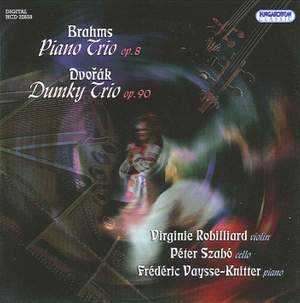 The low opus number (op. 8) of the Piano Trio in B major by Johannes Brahms (1833–1897) is misleading It doesn’t refer to a juvenile work but to its revised version made decades later, included therefore amongst the chamber music pieces of his mature years. Just like Brahms’s composition, the Dumky Trio (op. 90, B. 166) by Antonín Dvorák (1841–1904) is a mature composer’s work. Though Dvorák had also written works in national tone earlier, the grand poetic quality appeared in his style at this time, for which the Dumky Trio is the nicest example. Performed by Péter Szabo.