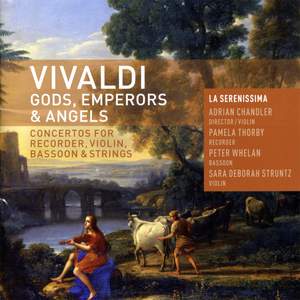 Vivaldi: Sonata for Recorder, Bassoon & Continuo in A Minor, RV 86

The playing of Adrian Chandler and his crack period-instrument band La Serenissima emulates the title of their eighth release for Avie, mining the treasures of Vivaldi’s vast output.

Who are these Gods, Emperors and Angels in the title of the latest virtuoso vehicle for Adrian Chandler and his dazzling period-instrument band La Serenissima? Vivaldi was connected to many Highnesses on the European continent, foremost among them the widely cultured Holy Roman Emperor Charles IV to whom Vivaldi dedicated his set of concertos titled La Cetra, meaning “The Lyre,” hence likening the emperor to the lyre playing god Apollo. The theme continues with the oddly titled Concerto Conca or “Conch Concerto,” alluding to the use of the conch shell as a musical trumpet, heard in the work’s first movement, and as used by Triton, son of Neptune and Amphitrite, and by Neptune’s attendants. The Angels are undoubtedly Vivaldi’s virtuoso female students at the Ospedale della Pietà, one of which was described in a contemporary anonymous poem: “She plays the violin in such a way / that anyone hearing her is transported to Paradise / if indeed it is true that up there / the angels play like that.”

Chandler and his forces, delivering their eighth imaginative album for Avie, play like gods, emperors and angels indeed, further securing their exalted place in the realms of early music performance.

Thorby shows off her supreme nimbleness and elfin charm; this is music that has sounded coldly mechanical in other hands, yet Thorby's personality and piper's box of subtle ornamental tricks give it a vocal vitality...With La Serenissima offering their usual bright but lightly cushioned sound, this is another disc of no-nonsense joy in the Vivaldian world.

Chandler yields nothing to his Italian rivals in terms of technique and flair...In matters of performance practice, [he] is willing to go back to the sources and try out seemingly strange things...these are must-have performances for all of Red Priests's musical parishioners.

This is a Vivaldi recital of wonderful contrasts, played with fizzing energy, crisply articulated, vividly coloured and passionate.

The most notable pieces are those featuring woodwind as lead instrument...it's Pamela Thorby's lead role in the Concerto for Sopranino Recorder, Strings & Continuo that dazzles, a virtuoso performance.