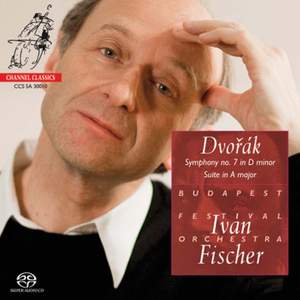 Iván Fischer: There are many hidden treasures among Dvorák’s works and it is a particular pleasure for me to present the beautiful Suite for Orchestra in A major on this disc. I think it should be performed more often in concerts, and I sincerely hope that this recording will inspire orchestras to extend their Dvorák repertoire with this composition of enchanting beauty, lyricism and freshness.

The 7th Symphony is among the greatest masterpieces. Symphonies, which start in a minor and end in a major key, like Beethoven’s fifth, Mahler’s first and many others take us from sadness to happiness, from tragedy to jubilation. But here Dvorák sustains the D minor to the very end: he turns to D major only in the final six bars! It is an extraordinary structure, an incredible development creating irresistible excitement.

Iván Fischer is founder and Music Director of the Budapest Festival Orchestra and Principal Conductor of the National Symphony Orchestra of Washington D.C. The partnership between Iván Fischer and his Budapest Festival Orchestra has proved to be one of the greatest success stories in the past 25 years of classical music. Fischer introduced several reforms, developed intense rehearsal methods for the musicians, emphasizing chamber music and creative work for each orchestra member. Intense international touring and a series of acclaimed recordings for Philips Classics, later for Channel Classics have contributed to Iván Fischer's reputation as one of the world's most visionary and successful orchestra leaders.

Fischer's approach is certainly involved with the work's expressive character, but also with Dvorak's strong symphonic control. The musical argument in the first movement is powerful...Fischer and the orchestra are at their best in the finale with puropseful development and a spine-tingling close - often the point at which some of the finest interpretations fall down.

This remains a youthful orchestra, and each of its tours and recordings has the atmosphere of a festival...Fischer maintains the momentum throughout [the Seventh], giving his woodwind soloists plenty of time to luxuriate in Dvorak’s inexhaustible stream of melodic ideas, yet never driving the music.

The turmoil of the opening movement of Dvorak's Seventh Symphony has rarely sounded so thrilling. The Budapest Festival Orchestra's cellos and double basses bite into this work with panther-like agility...Ivan Fischer balances vigour with softness