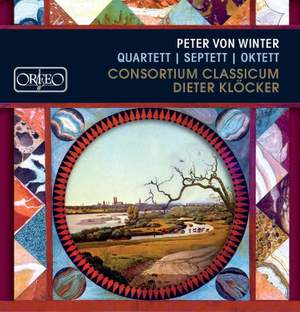 Posterity has not been kind to the composer Peter von Winter. He was a wunderkind of the Mannheim Court Orchestra who after its removal to Munich worked as its kapellmeister, but his music today is as good as forgotten. Yet, in Vienna and Italy he was a celebrated opera composer of international standing. He was praised by colleagues such as Carl Maria von Weber and Louis Spohr, which in itself is a sign of how he served as a model to the Romantics. At a time when Beethoven’s septets became regarded as ideal examples of how to write chamber music for strings and wind combined, it was in this very field that Peter von Winter displayed all his gifts for melody and instrumentation to advantage. In the Quartet, Septet and Octet on this new recording, we find different styles from the outgoing 18th century, both contrasted and fused together. We hear motifs that are prescient of Schubert and his Octet, alongside contemporary polonaise forms and other latently ‘national’ elements. Winter here pays homage to the same European spirit as do Beethoven and Haydn in their ‘British’ cycles of songs. The pre-Romantic atmosphere provided by the horns is interrupted by virtuosic elements that no member of the Consortium Classicum can let pass by and master clarinettist, Dieter Klöcker, is a match even for the music’s ‘operatic’ moments in technically difficult registers. Given the multifarious compositional gifts on display here, plus his inventive use of wind instruments, it is no surprise that Winter not only met Mozart several times, but that he also wrote a sequel to the Magic Flute with Mozart’s librettist, Emanuel Schikaneder, entitled The Labyrinth. Hopefully these performances by Dieter Klöcker and Consortium Classicum will prompt new interest in von Winter’s operas.