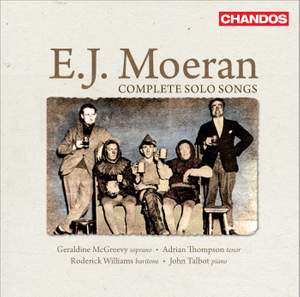 The songs comprise an impressive body, light-hued but intense, tinged with a distinctly Celtic melancholy...they're all well worth hearing. — BBC Music Magazine, June 2010, 5 out of 5 stars More…

Moeran: Spring goeth all in white

Moeran: When June is come

No. 1. When smoke stood up from Ludlow

No. 2. Farewell to barn and stack and tree

No. 4. The lads in their hundreds

No. 2. Impromptu in March

Moeran: In youth is pleasure

Moeran: The Merry Month of May

Moeran: 2 Songs from the repertoire of John Goss

No. 1. Strings in the earth and air

No. 2. The Merry Green Wood

No. 4. The Pleasant Valley

Moeran: 4 Songs from a Shropshire Lad

4 Songs from a Shropshire Lad: No. 2. When I came last to Ludlow

Moeran: Far in a western brookland

Moeran: The Sweet o' the Year

Moeran: The Day of Palms

No. 3. The Constant Lover

No. 4. The Passionate Shepherd

No. 3. When daisies pied

No. 4. When icicles hang by the wall

Moeran: If There Be Any Gods

Ernest John Moeran was the last major representative of the group of English composers who, in the first two decades of the twentieth century, sought musical inspiration in the melodic beauty of traditional folksong. The emotional and spiritual legacy of his dual Anglo-Irish nationality is in tangible evidence throughout his life and music. A pupil of John Ireland and friend of Peter Warlock, he composed music which displays the influences of Delius, Vaughan Williams, and of course his love of landscape.

Chandos here presents a unique album of his attractive complete solo song catalogue, many of which are premiere recordings. The release commemorates the fiftieth anniversary of his death.

Moeran wrote sixty original songs for solo voice and piano, including the settings of texts by James Joyce, Robert Bridges, Shakespeare and W.B. Yeats. His most famous songs are his settings of the works of A.E. Housman, with texts from Ludlow Town and A Shropshire Lad.

Baritone Roderick Williams, Soprano Geraldine McGreevy and Tenor Adrian Thompson are accompanied by John Talbot. This album is priced at 2-4-1.

And for those of you who are wondering – E.J. Moeran is on the right of the motley group of revellers!

The songs comprise an impressive body, light-hued but intense, tinged with a distinctly Celtic melancholy...they're all well worth hearing.

...this handsome set...amply demonstrates the composer's fecund lyricism, fastidious craftsmanship and natural gift for word-setting...Williams has the lion's share of duties and is in imperious form throughout, the voice gloriously rich and secure...In sum, a set that no lover of British song will want to pass over.

AE Housman seems to have brought something special out of Moeran just as his poetry did in so many composers of the same generation, and the highlights of these discs are the two groups of Housman songs that baritone Roderick Williams sings with his usual burnished fluency.