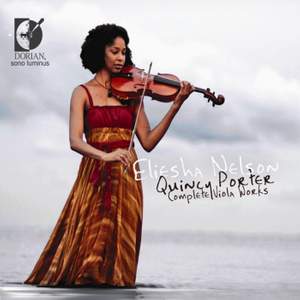 Celebrated American composer Quincy Porter (1897-1966) developed a unique music style and sound as a result of his studies in France with André Caplet and Vincent d’Indy, and in New York with Ernest Bloch. Porter’s music has a singing quality, possessing genuine rhythmic verve and is always fresh, spontaneous, independent, intellectual, and at the same time emotionally vital. Howard Hanson, stated that “Porter’s strings weave golden strands of melody, and his harmonies re-create for the ear of the listener the spirit of beauty.” As a violist, Porter created for his instrument an important, enduring, and stimulating body of musical literature. For the very first time, all of Porter’s works for viola have been recorded and are available on this disc. Performed by Cleveland Orchestra Violist Eliesha Nelson, in collaboration with Grammy® winner John McLaughlin Williams, and San Francisco Symphony Principal Harpist Douglas Rioth, this recording is a must for anyone interested in the repertoire of the viola or American music.

Eliesha Nelson began her musical life as a child of 8 in North Pole, Alaska playing Violin. In 1997 she moved her focus and passion from violin to the viola, and pursued a masters at the Cleveland Institute of Music. In 2000, after a year of performing as principal violist with the Florida Philharmonic, Eliesha was awarded a position in the world-renowned Cleveland Orchestra where she continues to perform today.