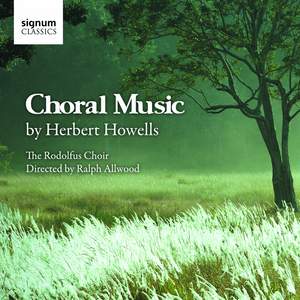 Their expertise is obvious...It's not just technical quality that is on offer here...The supple account of 'A Spotless Rose' is full of expressivity...Put simply, this disc has quality stamped... — BBC Music Magazine, September 2010, 5 out of 5 stars More…

Howells: The Summer is coming

Howells: One thing have I desired

Howells: Walking in the Snow

Howells: A Grace for 10 Downing Street

Howells: God be in my head

A true master and exponent of the British choral music tradition, Herbert Howells compositions and settings are brought to life in this collection of his secular and sacred works. Performances come from the youthful talents of The Rodolfus Choir, led by their director Ralph Allwood. The Rodolfus Choir is made up of singers aged from 16 to 25 who have been chosen from past and present members of Eton College's summer choral courses for prospective choral scholars. Many members of the choir are choral scholars, some are at music college and most hope to make a career in music. Ralph Allwood founded the choir in 1984, and has been Precentor and Director of Music at Eton since 1985. Signum have previously released two very well received discs with the choir - choral arrangements by Clytus Gottwald and the Monteverdi Vespers.

Their expertise is obvious...It's not just technical quality that is on offer here...The supple account of 'A Spotless Rose' is full of expressivity...Put simply, this disc has quality stamped all over it.

I could listen to the young singers of The Rodolfus Choir all day without tiring or losing my appetite for their collective musicianship and accomplished choral artistry.

these youthful singers...sing with the sensitivity and precision you would expect of the next generation of choral scholars. They give some lovely accounts in this interesting collection, particularly "One thing I desire" and the great canticle settings