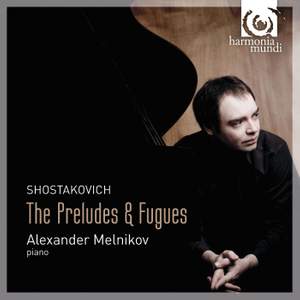 Melnikov unquestionably gives an impression of freshness and daring, as if he's discovering the music for the first time...Certainly one's bound to feel, listening to such superb playing, that... — BBC Music Magazine, June 2010, 5 out of 5 stars More…

Prelude no.1 in C major. Moderato

Prelude no.2 in A minor. Allegro

Prelude no.4 in E minor. Andante

Prelude no.5 in D major. Allegretto

Prelude no.6 in B minor. Allegretto

Prelude no.7 in A major. Allegro poco moderato

Prelude no.11 in B major. Allegro

Prelude no.16 in B flat minor. Andante

Prelude no.17 in A flat major. Allegretto

Prelude no.18 in F minor. Moderato

Prelude no.20 in C minor. Adagio

Prelude no.21 in B flat major. Allegro

Fugue no.21 in B flat major. Allegro non troppo (3-voice

Prelude no.23 in F major. Adagio

Prelude no.24 in D minor. Andante

Shostakovich’s 1950 visit to Leipzig to attend the Bicentennial Bach competition, where he heard and was impressed by Tatiana Nikolayeva playing Bach’s Well-Tempered Clavier, served as an impetus to write his own set of Twenty-Four Preludes and Fugues, loosely modelled on Bach’s. This he accomplished with remarkable, almost unbelievable speed upon his return home (it took him a mere three and a half months). Nikolayeva, blessed as she was with a phenomenal musical memory, performed Op. 87 for the rest of her life, and her name became practically synonymous with the work. This Op. 87 from Alexander Melnikov approaches the work from first principles to come up with his own, eminently musical solutions.

“…throughout op.87 we hear the voice of a tormented man, finding again and again the superhuman force to face life as it is – in all its variety, ugliness, and sometimes beauty.” Alexander Melnikov

"He has brought new audiences to [these works], and when you hear him play them, you understand why. Stylistically and temperamentally, they suit him remarkably well. This is music that is strenuous and searching without ever aspiring to flamboyance, and Melnikov is a self-effacing performer. He makes us aware of the music's paradox: that subordination to the rigours of Bach-like form permits great expressive, even political freedom. So we were reminded that the E Minor Prelude and Fugue is one of Shostakovich's big triumph-in-adversity pieces, and that the huge G Sharp Minor coupling into which the first half seemingly collapses is a tragic statement of searing intensity. All this was utterly mesmerising" (The Guardian on a live performance at the Wigmore Hall, 28th April 2011)

Melnikov unquestionably gives an impression of freshness and daring, as if he's discovering the music for the first time...Certainly one's bound to feel, listening to such superb playing, that this is indeed one of the greatest contrapuntal cycles since Bach. Overall, then, a magnificent achievement.

Few pianists have shown themselves to be so sensitive to music which is the response of a complex visionary to the corrosive banality of Soviet life at the time...[Melnikov] responds to all this with an impeccable all-Russian mastery and with a poetic commitment few could equal.

Melnikov is consistently alert to (and in control of) the music's dizzying variety of idioms and tones of voice...[He] conveys the scope of the collection as a totality with such consistent penetration and invention that this expertly engineered set can be enthusiastically endorsed for anyone seeking a complete recording

For all his brilliance in the extrovertly Bachian numbers, Melnikov, more than either Nikolayeva or Ashkenazy, is especially compelling in the internalised movements (the C minor and D minor preludes and fugues), baring the innermost thoughts of Shostakovich’s tormented soul. Simply unforgettable.

In this muscular, virile account, [Nikolayeva's] fellow Russian Alexander Melnikov makes you wonder why these works are considered monotonous or didactic. In his virtuosic hands, each one glints.