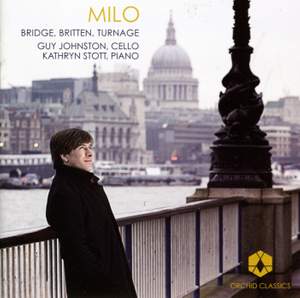 Both Johnston and Stott capture [the Bridge's] instability well, and Johnston finds exquisite moments in its more reflective eddies...this is an original, enterprising programme with plenty to... — BBC Music Magazine, July 2010, More…

4 Short Pieces: No. 2. Spring Song (version for cello and piano)

This CD documents a series of richly productive musical relationships between composers and musicians, and how these composers inspire and are inspired by the musicians with which they work: Frank Bridge and Benjamin Britten; Britten and Mstislav Rostropovich; Mark-Anthony Turnage and Guy Johnston.

Turnage met Johnston when he was still a teenager but was inspired by Johnston’s playing. Johnston premiered the eponymous work Milo at Turnage’s baby son Milo’s christening.

Guy Johnston, winner of the BBC Young Musician of the Year competition, was described by The Strad as “one of the most promising and distinctive cellists to emerge in recent years”. This is his debut recital CD.

Both Johnston and Stott capture [the Bridge's] instability well, and Johnston finds exquisite moments in its more reflective eddies...this is an original, enterprising programme with plenty to delight.

Britten's grippingly terse 1961 Sonata launches proceedings and receives as accomplished a reading as any I have heard in recent years, brimful of recreative flair and improvisatory freedom. With Kathryn Stott an ideally responsive partner, it's a real meeting of minds.

[Turnage's] music has taken a lyrical turn in the title track of this beautiful album: "Milo" is a little elegy for his new son, and "Sleep On" is an earlier set of lovely hypnotic lullabies for cello and piano, done with real sensitivity...Bridge's powerful Cello Sonata...emerges as a strong-boned, rhapsodic triumph.

What a relief to find an artist displaying his art...with repertoire selected after abundant musical thought and with little thought to the noise of fashion...There’s a glow and flourish about everything he plays...Stott’s panache on this heartening disc matches Johnston’s: you can tell these musicians are having a ball.