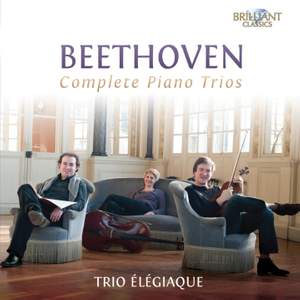 Beethoven: Symphony No. 2 in D major, Op. 36 (arranged for piano trio by the composer)

The piano trio existed, in other guises, long before Ludwig van Beethoven got his hands on it. But he was the composer who would expand the genre beyond all recognition, using his relentless creativity to exploit the piano trio to its full potential.

Beethoven begins his transformation of the genre – after his first two trios in the style of Haydn – with the emancipation of the cello, giving greater individuality to each of the three instruments. Piano Trio Op.1 No.3 foretells – almost ten years in advance – the heroicism of the composer’s ‘middle period’, and Op.70 No.2, written in 1808, is akin to the music of his ‘late period’. He reached new heights of dramaticism in the ‘Ghost’ Trio, with its intense tremolandi, while in the ‘Archduke’ he displayed the sheer symphonic power with which we now associate him. The works are performed here by Trio Élégiaque, an internationally acclaimed ensemble made up of three multi‐award‐winning performers: Laurent Le Flécher, Virginie Constant and François Dumont.

For the bigger part of his life Beethoven occupied himself with the formation of the Piano Trio. It offered him the perfect vehicle for the development of his compositional techniques (the three instruments acting as independent players in the quasi symphonic structures) and the exploration of instrumental brilliance and virtuosity.

Beethoven considered his first three piano trios worthy of his first official Opus number, the number 1, works of great scope, drama and wit. The 2 trios Op.70 form a bridge to late Beethoven, and find an equivalent in the Rasumovsky String Quartets Op.59. The great Archduke Trio Op.97 is magnificent in its symphonic breath and grandeur, one of Beethoven’s longest chamber music works.

The young French Trio Elegiaque has already received great critical acclaim for their recording of Messiaen and Dusapin (Diapason d’Or!). They played the Beethoven trio cycle several times in concert series, and their performances bear witness of their insight, enthousiasm and ensemble culture.