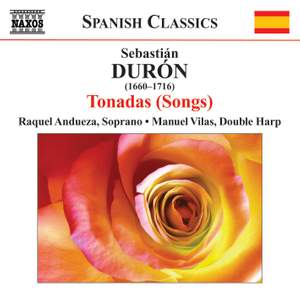 Duron: Que es esto, alevoso? (What is this, traitor?)

Duron: Amor, aunque quieras (Love, though you may wish)

Duron: Pues me pierdo en lo que callo (Since I lose by not speaking)

Duron: A la apacible sombra (In the peaceful shade)

Duron: Pues soy zagaleja (Since I am a shepherdess)

This recording is the first monograph devoted to the eminent composer Sebastián Durón, one of the most important musicians in Spain at the turn of the eighteenth century, who held the post of royal maestro de capilla at the Court of Charles II in Madrid. It features nineteen works for solo voice and accompaniment: sixteen secular tonadas taken from his zarzuelas and other stage works, one secular cantata in the Italian style and two solos dedicated to the Eucharist.