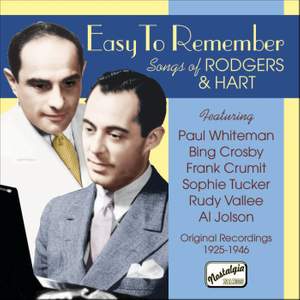 The Girl Friend: The Blue Room

A Connecticut Yankee: Thou Swell

Present Arms: You Took Advantage Of Me

Love Me Tonight: Isn't It Romantic

Hallelujah I'm A Bum: You Are Too Beautiful

Evergreen: Dancing On The Ceiling

Mississippi: It's Easy To Remember

Babes in Arms: The Lady Is A Tramp

Rodgers, R: Too Many Girls

Too Many Girls: I Didn't Know What Time It Was

By Jupiter: Ev'rything I've Got

Rodgers, R: On your Toes

On Your Toes: Slaughter On Tenth Avenue