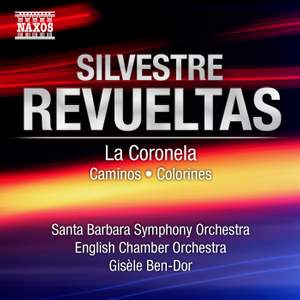 I. Los Privilegiados (The Upper Crust of 1900): La Levita y el Sorbete (The Israelite Charity Lady and the Gentleman)

I. Los Privilegiados (The Upper Crust of 1900): El Espejo (The Mirror)

Dubbed ‘The Mexican Falla’, Silvestre Revueltas lived hard and died young in poverty. His music was revolutionary, embracing the ‘vulgarity’ of the people and rejecting colonialist cultural models.

His unfinished ballet La Coronela (The Lady Colonel) follows a scenario of skeleton figures involving the overthrow of the ‘decadent bourgeois’ by the working class.

This recording is the first to adhere faithfully to the reconstruction by Eduardo Hernández Moncada and José Limantour, the only surviving version of the work.

Itinerarios (Travel Diary), a solemn, intensely lyrical work, and the symphonic poem Colorines mark the beginning and end of his most fertile creative period.