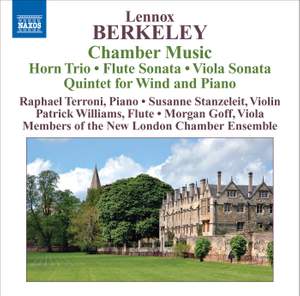 Stephen Stirling's horn playing is magical...Morgan Goff brings both sensitivity and charisma [to the Viola Sonata]. Pianist Raphael Terroni is a constant throughout these performances and is... — BBC Music Magazine, September 2010, 4 out of 5 stars More…

Lennox Berkeley amassed over 100 works and contributed to almost every genre.

The Trio for Violin, Horn and Piano was premièred by Dennis Brain and Colin Horsley in March 1954. The Sonatina can also be performed on recorder and piano; in which guise its artless amalgam of Baroque and neo-Classical traits has ensured its popularity.

The Viola Sonata is among the more sombre of Berkeley’s works and perhaps reflects something of the times – the aftermath of the Second World War – in which it was written. The Quintet for wind and piano is among the more extended chamber works from Berkeley's later years.

Stephen Stirling's horn playing is magical...Morgan Goff brings both sensitivity and charisma [to the Viola Sonata]. Pianist Raphael Terroni is a constant throughout these performances and is clearly a demur yet supportive chamber player.

Outstanding in the ensemble are the brilliant horn player, Stephen Stirling, and the violinist, Susanne Stanzeleit, though all offer excellent performances and are very well recorded with plenty of air around the sound and clean separation. Another excellent disc from Naxos, well worth the modest price.