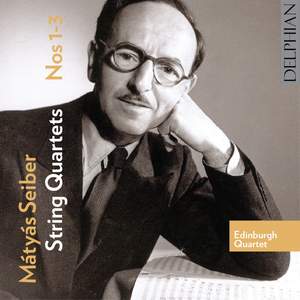 Mátyás Seiber’s three string quartets span his career, from the astonishingly assured student essay of the first quartet, composed at the age of just 18, to the mature synthesis of his third and final Quartetto Lirico. Seiber’s work was nourished by several of the 20thcentury’s most significant stylistic trends, from jazz and serialism to the folk music of his native Hungary. He was also, like many of the mid-century’s most important artists, an émigré and an influential teacher; Hugh Wood’s booklet essay pays tribute to his lasting influence on a generation of British composers.

The Edinburgh Quartet was founded in 1959 when Sidney Newman, then Reid Professor of Music at Edinburgh University, invited Miles Baster to return from New York's Juilliard School of Music to establish a professional quartet based in the City of Edinburgh. Previously the New Edinburgh Quartet had filled this role, and their cellist Ian Hampton (son of Griller Quartet cellist Colin Hampton) remained in Edinburgh to provide a link between the two ensembles. Now celebrating its 50th anniversary and with a distinguished international profile, the Edinburgh Quartet is Scotland's premier string quartet. Resident at the Ian Tomlin School of Music, Edinburgh Napier University and at the University of Glasgow, it is one of the UK's longest-established university-based professional quartets and is Scotland's only full-time chamber ensemble.