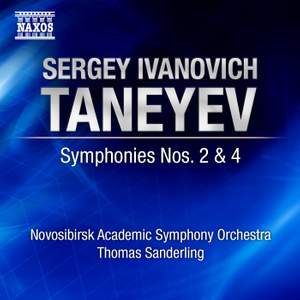 Taneyev, S: Symphony No. 2 in B flat major

I. Introduction and Allegro

Known to Tchaikovsky as the ‘Russian Bach’ and to Rachmaninov as ‘a master composer [and] a pinnacle of musical Moscow’, Sergey Taneyev was one of the most highly regarded and influential musical figures of his time.

His unfinished Symphony No. 2, begun while Taneyev was a student at the Moscow Conservatoire, was recognised by his teacher, Tchaikovsky, as a work of considerable promise. It is heard here in Vladimir Blok’s edition, first performed in 1977.

Taneyev’s Symphony No. 4, composed twenty years later, is a large-scale masterpiece considered by many to be his finest orchestral work.