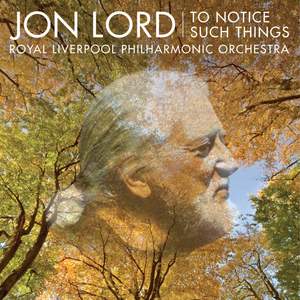 Jon Lord - To Notice Such Things

Lord's writing is consistently warm and melodically strong, and while the music is more loosely impressionistic and illustrative than symphonic in structure, it easily and touchingly sustains... — BBC Music Magazine, August 2010, More…

Lord, J: To Notice Such Things

I. As I Walk Out One Evening

V. Winter of a Dormouse

Classically trained composer and keyboard player Jon Lord is best known for his 40-year involvement in the rock group Deep Purple. In 2002 he decided to devote his time to classical composing and five years later achieved great acclaim for his ‘Durham Concerto’ which made the top 10 in the UK’s Classical Artist Chart and was the highest new entry (number 75) in Classic FM’s 2009 Hall of Fame.

‘To Notice Such Things’ is a collection of four newly-recorded orchestral works featuring the Royal Liverpool Philharmonic Orchestra and Jon himself on piano. The title work – which takes its name from the last line of the Thomas Hardy poem “Afterwards” – is scored for flute, piano and strings and is a poignant tribute to Jon’s long time friend, the late John Mortimer, CBE, QC. Each of the suite’s six movements recalls some aspect of Mortimer’s illustrious life and career, from literature, liberalism and legalese, to days in the country and musings on life itself. This recording serves as the lasting memento of a great, beloved English eccentric. Also on the album is a gorgeous instrumental arrangement of Jon’s “Evening Song” (the original appears on the best-selling album ‘Pictured Within’); For Example, a double homage to one of Jon’s early piano teacher and an early favourite composer, Edvard Grieg; and “Air on a Blue String”, a blues-meets-Bach fusion. The album ends with Jeremy Irons reading of the poem “Afterwards”, accompanied by Jon on the piano.

“In the small but growing field of pop stars who write classical music, Lord is a clear leader.” The Times

“An avid and accomplished composer” Fanfare

Lord's writing is consistently warm and melodically strong, and while the music is more loosely impressionistic and illustrative than symphonic in structure, it easily and touchingly sustains listener interest in its half-hour duration.

Familiar from Lord's previous concert-hall works is his fluent enjoyable reimagining of later-19th- and earlier-20th-century symphonic writing and the subject matter of friends pictured within...Performance and recording are both first-class.