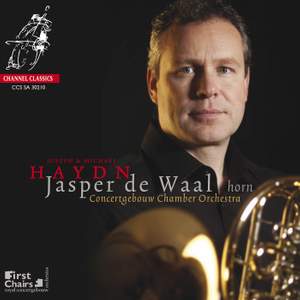 Haydn, M: Romance in A flat major for horn & string quartet (after Mozart)

Haydn, M: Adagio and Allegro Molto for Horn and Trombone from Serenade in D major

Jasper de Waal has occupied the position of first horn with the Royal Concertgebouw Orchestra since 2004.

He won several regional music competitions for young musicians in1983 and 1984. Jasper can be heard as a soloist on dozens of recordings of the Royal Concertgebouw Orchestra. His other recordings include the horn trios of Johannes Brahms and Jochem Slothouwer and Gregson’s horn concerto.

The Royal Concertgebouw Orchestra is made up of orchestral players of the highest international standing. Many of them can be heard not only in the orchestra but also regularly in chamber music performances. After all, the fabulous wealth of that repertoire is a rewarding challenge for any musician.

In the CD series ‘First Chairs of the RoyalConcertgebouw Orchestra’, musicians submit their personal calling card, as it were, with their very own choice of music from their particular instrument’s repertoire. This is one of the ways that the orchestra can proudly introduce its musicians as individuals.

This ebullient collection features Concertos and chamber works for Horn by both Michael and Joseph Haydn.