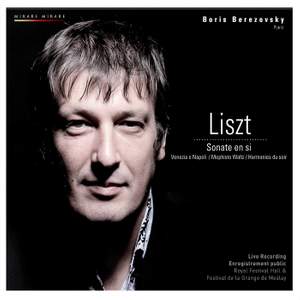 in the outer sections of Mephisto Waltz No. 1 he finds a remarkable balance between driving velocity and allowing the notes to speak...Venezia e Napoli's three pieces are here a happy experience,... — BBC Music Magazine, April 2010, 3 out of 5 stars More…

Liszt’s Transcendental Études bear the dedication “To Carl Czerny with the deep respect of a grateful pupil”. In its ultimate form, these Romantic poems were incredibly far from Czerny’s études, with which young pianists are terrorised at school. The title of ‘transcendental’ points at the exceptional, superhuman technical difficulties which Boris Berezovsky masters with seeming ease. The cycle Years of Pilgrimage was written during travels to Switzerland and Italy when the 24-year-old Franz Liszt had romantically fled Paris with the Countess Marie d’Agoult. The pieces Venezia e Napoli – Gondoliera, Canzone and Tarantella – appeared as an addition to the second, Italian year of L’Années. The dazzling piano score serves not for a demonstration of virtuosity but rather to create coloratura, or rather a fantastical aura of sound around Italian melodies.

“Here, surely, we have the truest successor to the great Russian pianists.” Gramophone

“Can you imagine the famous "Revolutionary" Etude played by left hand alone? Hard to believe. But there it was. And, as with everything else in this concert, it was beautifully shaped. That ability to transcend the physical challenges of such preposterously difficult music was part of Berezovsky's secret. And he sustained it throughout five of Liszt's Transcendental Studies. Virtuosity was more a tool rather than an end. And at the close, after a few impeccably shaped miniatures as encores, one was left thinking that Berezovsky is one of the greatest pianists of our time.” Irish Times

in the outer sections of Mephisto Waltz No. 1 he finds a remarkable balance between driving velocity and allowing the notes to speak...Venezia e Napoli's three pieces are here a happy experience, with Berezovsky's wonderful dexterity allowing the music to flow with the improvisatory suppleness that it needs

The palpable enjoyment Boris Berezovsky conveys of playing this demanding music is not the least attraction of his outstanding performance. The technical challenges are tossed off with aplomb and exhilarating tempi, every detail clearly articulated within huge, sweeping paragraphs