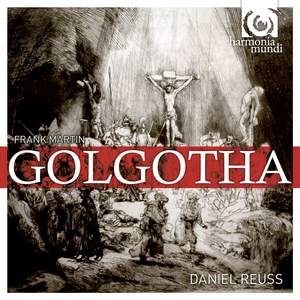 A restrained, haunting chromaticism suffuses the music...The choral contributions throughout are engaged and responsive...this is a strong performance of a work where this is limited competition... — BBC Music Magazine, May 2010, 4 out of 5 stars More…

Rembrandt’s engraving The Three Crosses (1653) inspired Frank Martin to conceive his oratorio Golgotha. As he explained while he was still working on the score: „Once I had seen these etchings, I was positively haunted by the idea of realising an image of the Passion with my own resources. . . I would have liked to concentrate this whole terrible and magnificent drama in a very short work, just as Rembrandt had done on his modest little rectangle of paper. But... I had no choice but to come round to the idea of an oratorio, which was capable by its very dimensions of creating the framework and atmosphere necessary for the expression of a subject of this kind.“ Inevitably Martin’s second oratorio was influenced by J.S. Bach, with whose Passions Martin, the tenth child of a Huguenot pastor, had been familiar since childhood and which he willingly described as ‘precedents’ for the genre.

Ten musical tableaux, grouped into two parts of roughly equal length, relate the story of Christ’s Passion from the entrance into Jerusalem until the Resurrection. Martin draws on all four Gospels, interspersed with excerpts from the Meditations and Confessions of Augustine of Hippo, and individual verses from the Psalms and liturgy for Holy Saturday. The final part of the work became an epilogue, anticipating the events of Easter Day, replacing mourning with hope. Here Martin seems to have captured that ‘strange white light’ of transfiguration which he had so admired in Rembrandt’s etching: the paradox of a luminous darkness. The score was completed in Amsterdam on 8th June 1948, and premièred a little less than a year later, on 29th April 1949, in Geneva. By his own admission, Martin had not intended his oratorio, composed without a commission, for public performance. For this artist deeply shaken by the horrors of war, recourse to the Passion genre and its core religious message may have been an attempt to restore his own faith in the future and thereby to raise a milestone in that time of devastation, when Europe was at zero hour. Daniel Reuss founded Cappella Amsterdam in 1990, which he has since turned into a full-time professional ensemble. He conducted the RIAS Kammerchor for the first time in 2000 and during his four years as artistic director of the choir (2003-6), they made five recordings for harmonia mundi. In February 2007, he made his debut at English National Opera in Handel’s Agrippina. He became artistic director and chief conductor of the Estonian Philharmonic Chamber Choir in September 2008.

A restrained, haunting chromaticism suffuses the music...The choral contributions throughout are engaged and responsive...this is a strong performance of a work where this is limited competition on CD at present. As such it warrants a warm welcome.

The quintet of soloists sounds at ease with the demanding roles...The two choirs make light work of Martin's demanding part-writing...Reuss maintains a tight grip on the unfolding drama...there is such an obvious intensity and love of this extraordinary piece that it never feels as though it is dragging...A revelatory recording.

this remarkable recording of “Golgotha”...makes Martin’s place on the modernist spectrum seem irrelevant. A bittersweet melancholy pervades this poignant, distinguished score, with its hints of Renaissance polyphony and ancient mysticism.