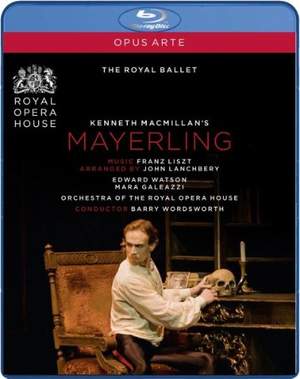 Edward Watson takes the role of Crown Prince Rudolf in Kenneth MacMillan's compelling ballet which lives out the final eight years of Rudolf’s life with its relentless downward spiral of political intrigue, drugs and murder. It culminates with the suicide pact at the hunting lodge - known as Mayerling - between Rudolf and his 17-year-old mistress, Mary Vetsera (Mara Galeazzi). Filmed in high definition and recorded in true surround sound.

“…while Mara Galeazzi as Mary Vetsera nearly stole the show with her natural conviction, exuberance and authoritative technique, the evening belonged to Watson as Rudolf, one of the most challenging male roles ever created.” Sunday Express