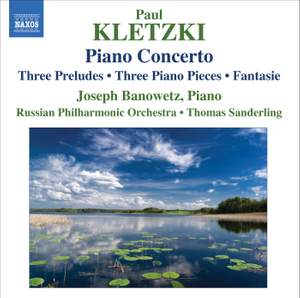 Treated ‘like a son’ by Wilhelm Furtwängler and admired by Toscanini as both composer and conductor, Paul Kletzki was active as a composer between 1921 and 1942, relinquishing this creative outlet to become famous solely as a conductor.

All the works on this disc are adventurous, sometimes improvisatory, tonal pieces which push the pianist’s technique and musicianship to the limit.

The Fantasie is a colossal work of highly contrapuntal music, a sonata comprising four movements joined together within a single continuous movement, while the Piano Concerto may be counted among the most significant twentieth-century contributions to the genre.

Joseph Banowetz has been described by Fanfare as “a giant among keyboard artists of our time.”