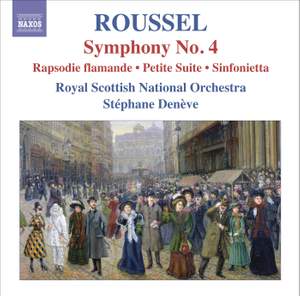 The mysterious central Andante, recalling Roussel's early period, is utterly magical in Denève's hands...there is beautiful playing from the RSNO, especially in the opening of the final movement,... — BBC Music Magazine, June 2010, More…

Following a period of soul-searching during the mid-1920s, and as his music gained success outside France during the 1930s, Albert Roussel took the rhythmic dynamism, thematic integration and formal lucidity of his Third Symphony (8.570245) to new heights with his less well-known Fourth, notable for its intensely wrought slow movement.

The pungent Sinfonietta, the Flemish Rhapsody, which draws on popular songs of the Belgian provinces, the picturesque Petite Suite and the exquisite Concerto for small orchestra showcase the composer’s colourful orchestration and fastidious craftsmanship.

The mysterious central Andante, recalling Roussel's early period, is utterly magical in Denève's hands...there is beautiful playing from the RSNO, especially in the opening of the final movement, and some marvellous moments, such as the first climax of the Lento molto.

an excellent disc, splendidly and idiomatically performed and a superb advertisement for composer, conductor and orchestra. Highly recommended.

The most recent digital set on Naxos is, on balance, perhaps the best [Roussel cycle], and is certainly well on its way to being the most comprehensive...This final CD is especially valuable for including many rarities: a delightful Flemish Rhapsody with an especially imposing beginning and three three-movement works.