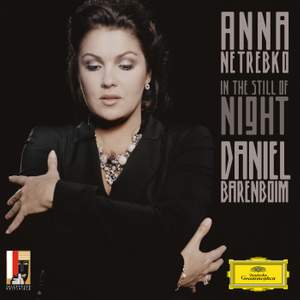 Offer, In the Still of Night

Songs by Rimsky-Korsakov and Tchaikovsky

it's a pleasure to find that [Netrebko] hasn't - unlike some other Russian singers - lost touch with her native repertoire; and not just the well-known bits...she has this music in her bones,... — BBC Music Magazine, May 2010, 5 out of 5 stars More…

Anna Netrebko’s first live solo album and first Lieder album is accompanied by star conductor/pianist Daniel Barenboim. This was the concert event of the Salzburg Festival 2009 and your first Deutsche Grammophon priority of the year.

For her Salzburg recital, Anna Netrebko programmed an all Russian evening. Companioned by Barenboim’s masterful, idiomatic playing, Anna’s voluptuous voice surrenders completely to the haunting, soulful melodies of songs by Rimsky-Korsakov, Tchaikovsky, and others.

On the heels of her successful Russian Album – more than 270,000 copies sold and still selling strong – In the Still of Night is certain to soar.

it's a pleasure to find that [Netrebko] hasn't - unlike some other Russian singers - lost touch with her native repertoire; and not just the well-known bits...she has this music in her bones, making it a delightful recital, with agreeable Dvorak and Strauss encores.

[Netrebko has] a wonderfully full, firm and creamy voice, and she effectively varies the emotional pressure from one song to the next, encompassing humour and ecstasy as well as warmth and sympathy.

Netrebko’s supremacy in her native song repertoire can’t be challenged today...She seems to have enriched and enlarged her palette of tone colours since the birth of her son. I guess she is at her absolute peak, vocally...[Barenboim's] playing is a luxury beyond price.

Barenboim’s playing is exquisitely sensitive and imaginative throughout

Russian songs and romances may not be Barenboim’s usual repertoire, but he presents the accompaniments subtly, and with selfless generosity. More surprisingly, these superstars work very well as a team...Netrebko’s voice, fuller in tone than it has been before, dapples these miseries of love with nicely varied colours and intoxicating shots of high drama