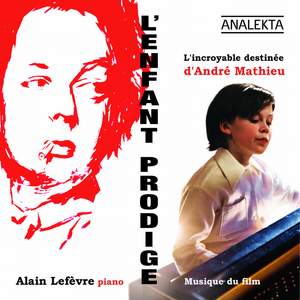 Mathieu, A: Concerto No. 4 in E Minor for piano and orchestra - I. Allegro

Mathieu, A: Concerto No. 4 in E Minor for piano and orchestra - III. Allegro con fuoco

Mathieu, A: Prélude romantique No. 5

These two discs feature the soundtrack of a film about the Canadian composer André Mathieu and include excerpts of many of his works together with pieces by Lefèvre. Mathieu was a child prodigy and was regarded as the “Canadian Mozart”. Sadly, he died suddenly at the age of only 39, having led a life which went from great success to the depths of his last tormented years.