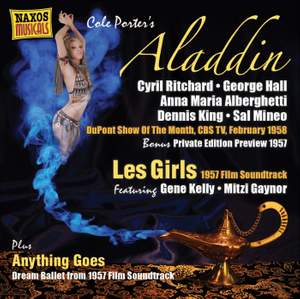 Come to the Supermarket (In Old Peking) (Magician, Chorus)

Trust Your Destiny to Your Star (Astrologer)

Opportunity Knocks but Once (At Thuh Door) (Magician, Chorus)

Wouldn't it be Fun (Emperor)

I Adore You (Aladdin, Chorus)

No Wonder the Taxes are High (Magician, Chorus)

I Adore You (Reprise) (Princess, Aladdin)

Trust Your Destiny to Your Star

Opportunity Knocks but Once (At Thuh Door)

You're just Too, Too! (Barry, Lady Sybil)

Cole Porter’s final musical, Aladdin, loosely based on the famous story from The Thousand and One Nights retains the tale’s Chinese setting and its well known story of the lad and his magic lamp, while transforming it into a fully fledged musical many of whose songs are much admired, though the show was not well received at the time.

The original Broadway cast recording is here complemented with tracks from the private edition preview, together with excerpts from Les Girls and the Dream Ballet based on music from Let’s Do It and All Through The Night.